Long term initiative to design and build by 2040 a huge 0.5km diameter two section ('ring' and 'core') space craft for the purpose of touring our solar system - and no further. Named after its minty candy likeness and the Italian explorer, POLO MARCO will journey to specified planets and moons where spectacular low orbit views will be provided via real and mega definition virtual windows, with live feeds and telemetry data transmitted to Earth.

All aspects of POLO MARCO are based on viable technologies and concepts liable to mature over the coming decades. No Science Fiction - all the real McCoy, Captain. 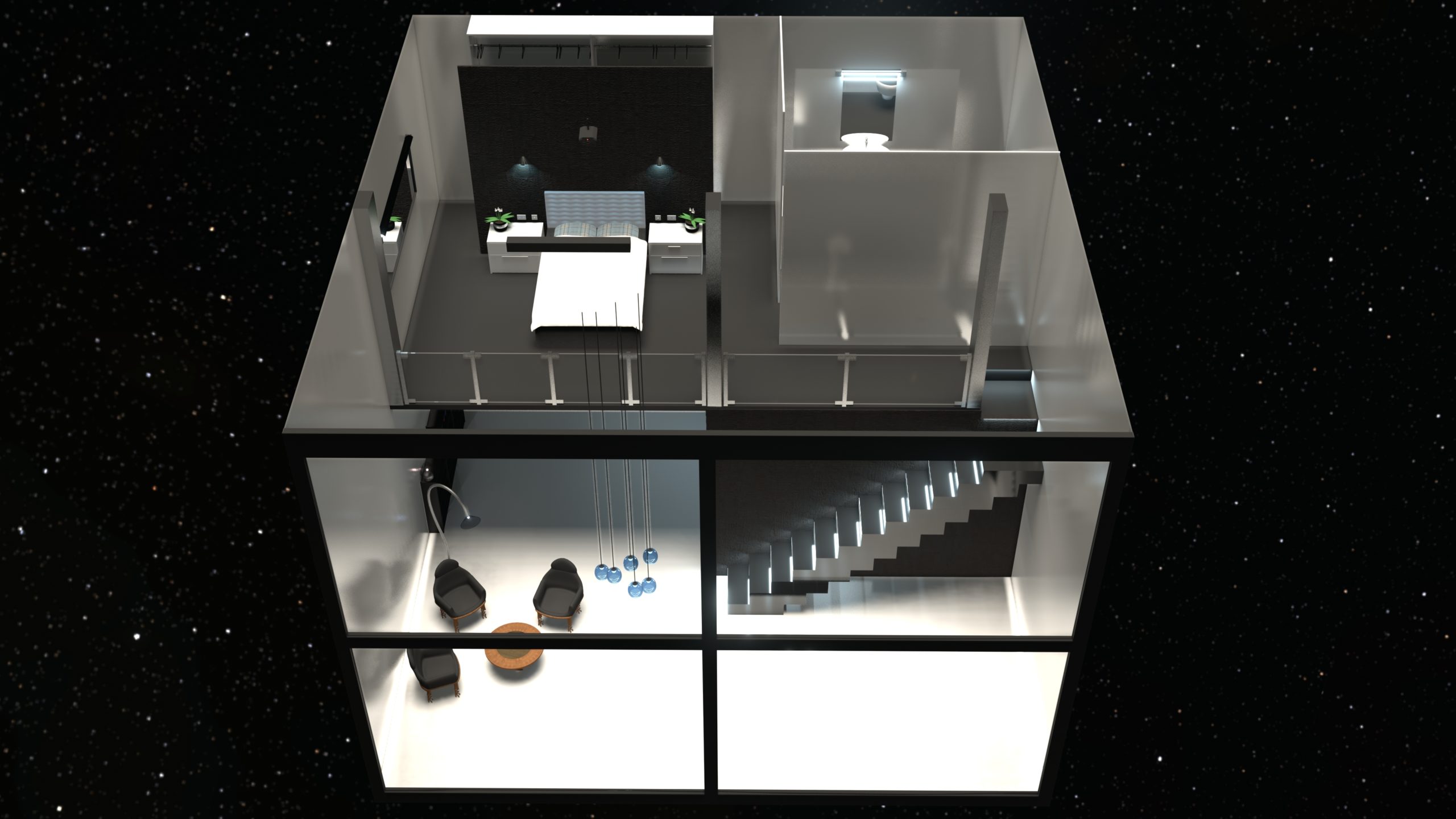 The outer ‘Polo’ ring spins to generate Earth level gravity for the 1.5km Ilex Way nature walkway, Cubeins, laboratories, medical and other gravity reliant facilities are located. A beautiful full circumference angled window made from harmful ray blocking toughened glass wraps around the front of the ship, providing stunning views from Ilex Way. Four battery modules are docked onto the rear of the ring.

The separable core features an ion drive low thrust engine but enough room to house passengers during an emergency on the main ring. The core also contains facilities that are potentially dangerous or do not require gravity. The four retractable spokes / PBBs (Passenger Boarding Bridges) allow the core to dock and undock from the ring. The POLO MARCO chassis construction will depend on whether the ship is ever launched from a planetary surface. If it is, the forces exerted on the ship will be beyond anything experienced gently cruising through space.

The social core of POLO MARCO and named after a dog walker’s paradise in West Sussex (England > United Kingdom > Earth), Ilex Way is where passengers and crew will enjoy walks, runs, sports, picnics, swims and even cycle or ride electric buggies below artificial sunlight. 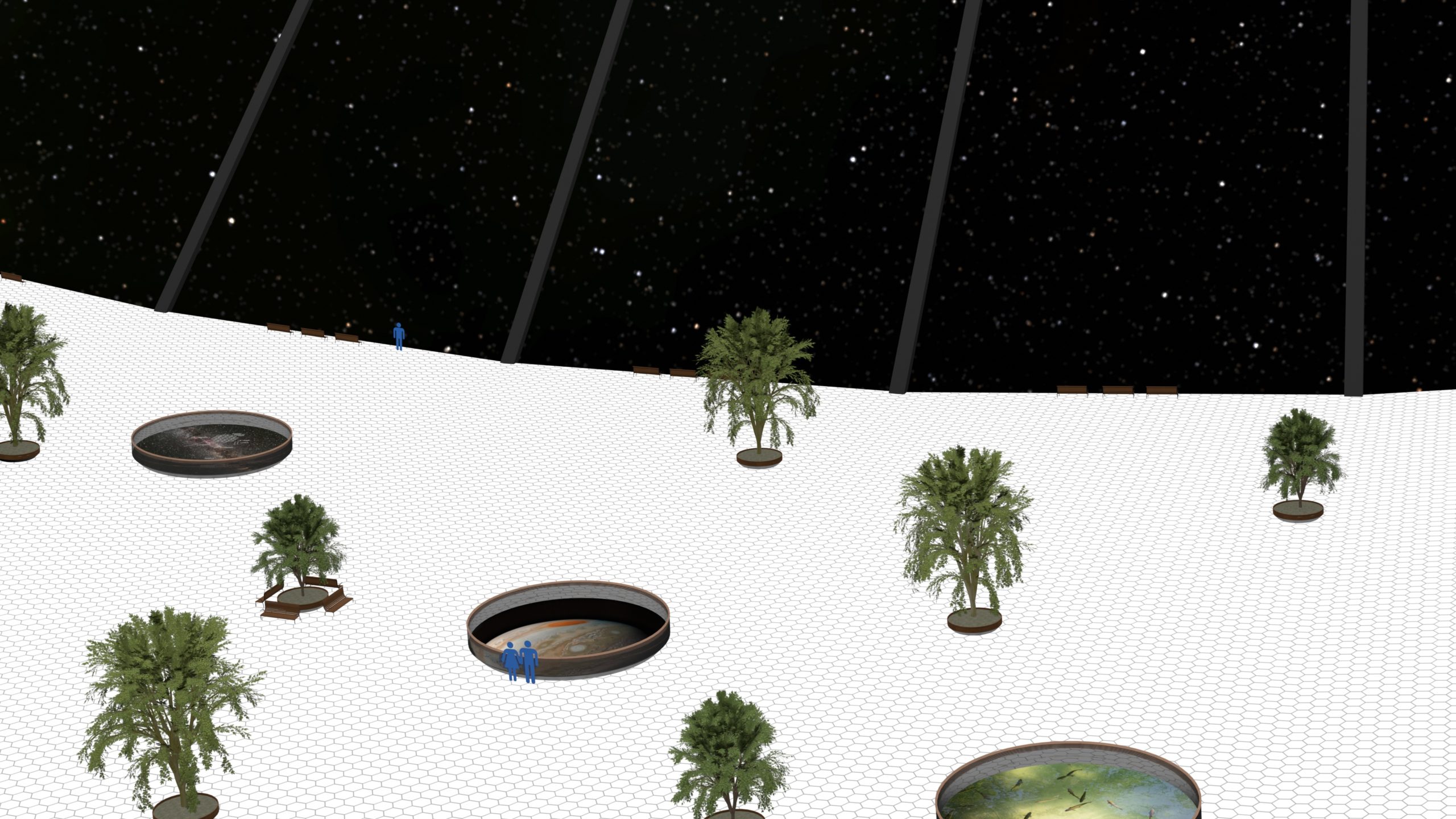 Fig 2 - On one side of the inside edge of the gravity ring is ILEX WAY - a 1.5km continuous walkway featuring real trees, seating and the innovative VideoPonds™ showing live space views and other scenes through a familiar yet quirky medium. Starfield image in left VideoPond by Carter Roberts of the Eastbay Astronomical Society in Oakland, USA using Kepler spacecraft.
CONCEPT VISUALISATION 1.0

Even with future developments in space propulsion technology, the tour would by its nature occupy a significant proportion of the passenger and crew lives. Earthlike natural features on Ilex Way ensure passengers and crew can benefit from activities that maintain their physical and mental well being. Deep sleep technology may be available for lengthy periods of travel at the discretion of the individual.

Although there will be a dedicated hospital on POLO MARCO, the Cubeins feature built in medical diagnostic systems so patients can remain 'at home' if need be.

This has been paramount in the design of POLO MARCO. All components that could pose a threat during failure can be quickly ejected. Each main rocket pod and the four battery packs on the rear of the ring can be ejected. If a serious fault develops in the core section, it can detach without affecting POLO MARCO operation. Fuel for the main rocket pods and thrusters is stored in individual ejectable tanks in the rear of the ring.

Like a sea-born vessel, with the exception of Ilex Way, POLO MARCO is compartmentalised. If a foreign object such as an asteroid penetrates the hull, that section can be sealed off. Ilex Way runs parallel to the Cubeins that themselves can be sealed with their own emergency air supply, acting as on board 'safe havens' until any emergency is over. We are exploring the idea of some Cubeins being ejectable so they can act as lifeboats or even shuttles. 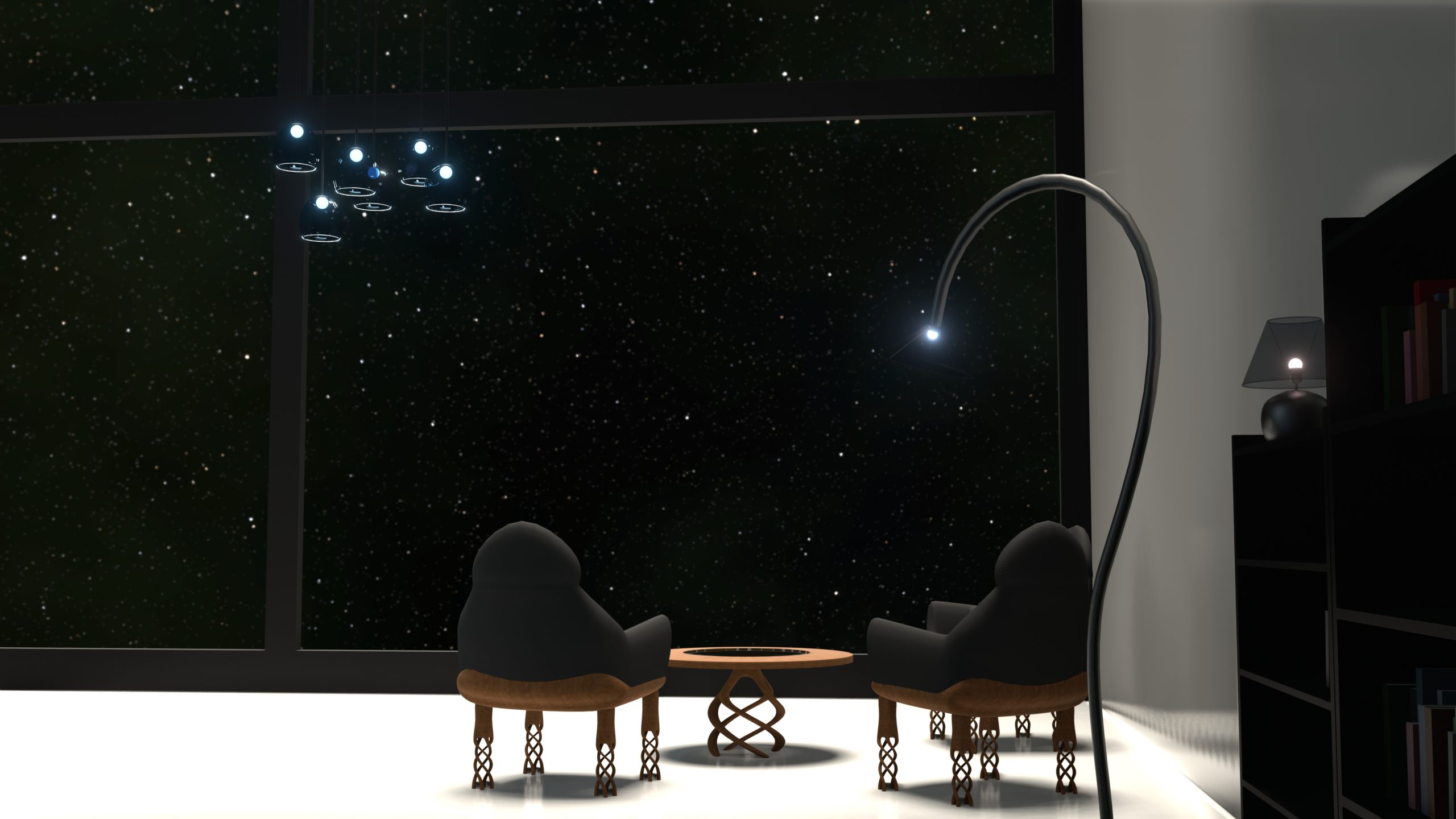 Fig 3 - Each Cubein offers stunning views of space via virtual or real windows, depending on the structural integrity of that section of the ship
CONCEPT VISUALISATION 1.0

The small dual thruster pods behind each main rocket pod spin the ring to generate gravity or bring the spin to a stop. The core contains a huge low thrust ion drive engine to slowly accelerate POLO MARCO on any long journeys. It is possible a conventional rocket may also be attached to the rear of the ion drive, with a swivel mechanism used to switch between the two.

Small thrusters are mounted on each core spoke/PBB for use in docking and undocking the core with the ring or for briefly maneuvering the core when it is separated from the ring within the constraints of on board fuel supplies.

As of 2020, we are exploring whether the entire POLO MARCO ship will be constructed in space, or the ring built on and launched from Earth, with only the core constructed in space - as has always been planned. The amount of energy and forces required to lift each KG/lb of anything into space against Earth level gravity is considerable, therefore, if the ring is to be launched from Earth (with passengers ferried up later either way), four huge reusable SpaceX rockets could be temporarily attached to the built in rocket pods and jettisoned once the POLO MARCO ring reaches space. However...

The forces exerted on the aerodynamically terrible ring and launch rocket attachments would cause it all to break up during launch. Therefore, two tough but lightweight cross members would join each launch rocket to ensure structural integrity. All said, a considerable amount of research will be required to ascertain if the ring can be launched from Earth, else it will be constructed in space.

It is assumed that over the coming decades the technology and materials will exist to allow POLO MARCO to land and (possibly) take off from low gravity solar system planets and moons. If it is ascertained that it is never going to be practicalfor POLO MARCO to take off from any planet, there is possibility that once POLO MARCO has been retired from duty as a space touring ship, it could land on and become a permanenent Mars colony facility.

POLO MARCO’s mission is to enthral and educate, not decimate. However, whilst sentient threats are unlikely, there is the remote risk of foreign objects threatening the ship, such as a rogue asteroid or even space debris that may be common around local planets and moons. If sensors detect (!) a possible threat to POLO MARCO and the huge ship cannot make a timely course adjustment, then energy beam technology based on that in development by the US military today could be used to superheat and destroy any approaching objects.

A well trained but easy going uniformed police force will exist on the ship to help and protect. Non hull breaching weapons will be available at the last resort. 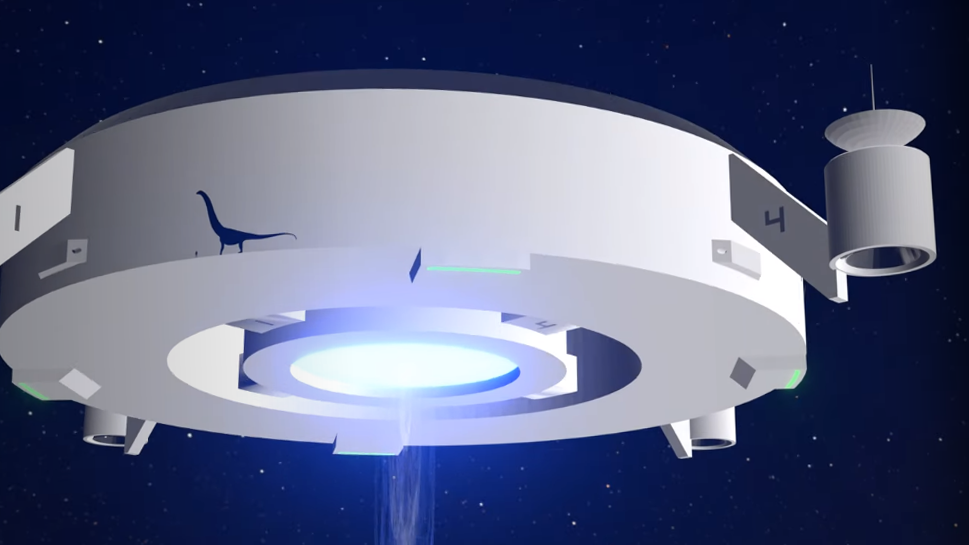 Fig 4 - To provide a sense of scale, Earth's largest dinosaur, the 21.3m/70ft tall Argentinosaurus is shown on the side of POLO MARCO. Look carefully and you may spot a smaller humanoid life form nearby.
CONCEPT VISUALISATION 0.4

For reliability, POLO MARCO relies upon a variety of energy sources. The entire skin of the ship would be made from a photosensitive material based on next generation flexible solar panels already in development here on Earth. This will ensure that during parts of the tour when sunlight is available, energy can be generated and stored. The main rockets and possibly* the manoeuvring thrusters rely on conventional rocket fuel.

Small Modular Reactors (SMRs) are being considered as the ship's primary source of energy, although cooling a nuclear reactor away from large sources of coolant is an issue we hope will be dealt with prior to construction. It may be possible to use water from other facilities, such as the ‘outdoor’ swimming pool on Ilex Way. Effectively, the reactors could provide the ships hot water supply!

The skin of POLO MARCO is to be semi organic with self healing properties similar to those developed in Japan for next generation airliners and LG (Korea) in a curved mobile phone launched in 2013. This will handle small low speed impact damage. Larger ruptures will be filled by repair robots and/or space suited humans using a tough flexible putty that can harden without air. In the event of catastrophic damage, including hull breaches, compartments can be sealed off and spare panels used to conduct repairs.

We are exploring the idea of at least one ship shuttle for conducting repairs to POLO MARCO, dealing with foreign objects and ferrying passengers to and from the ship.

A commercial and community venture, a proportion of POLO MARCO passengers will be children chosen by lottery from random Earth nations. This will offer youngsters a remarkable opportunity to spend several years of their early lives on an adventure like no other.

TAKE HER* FOR A SPIN 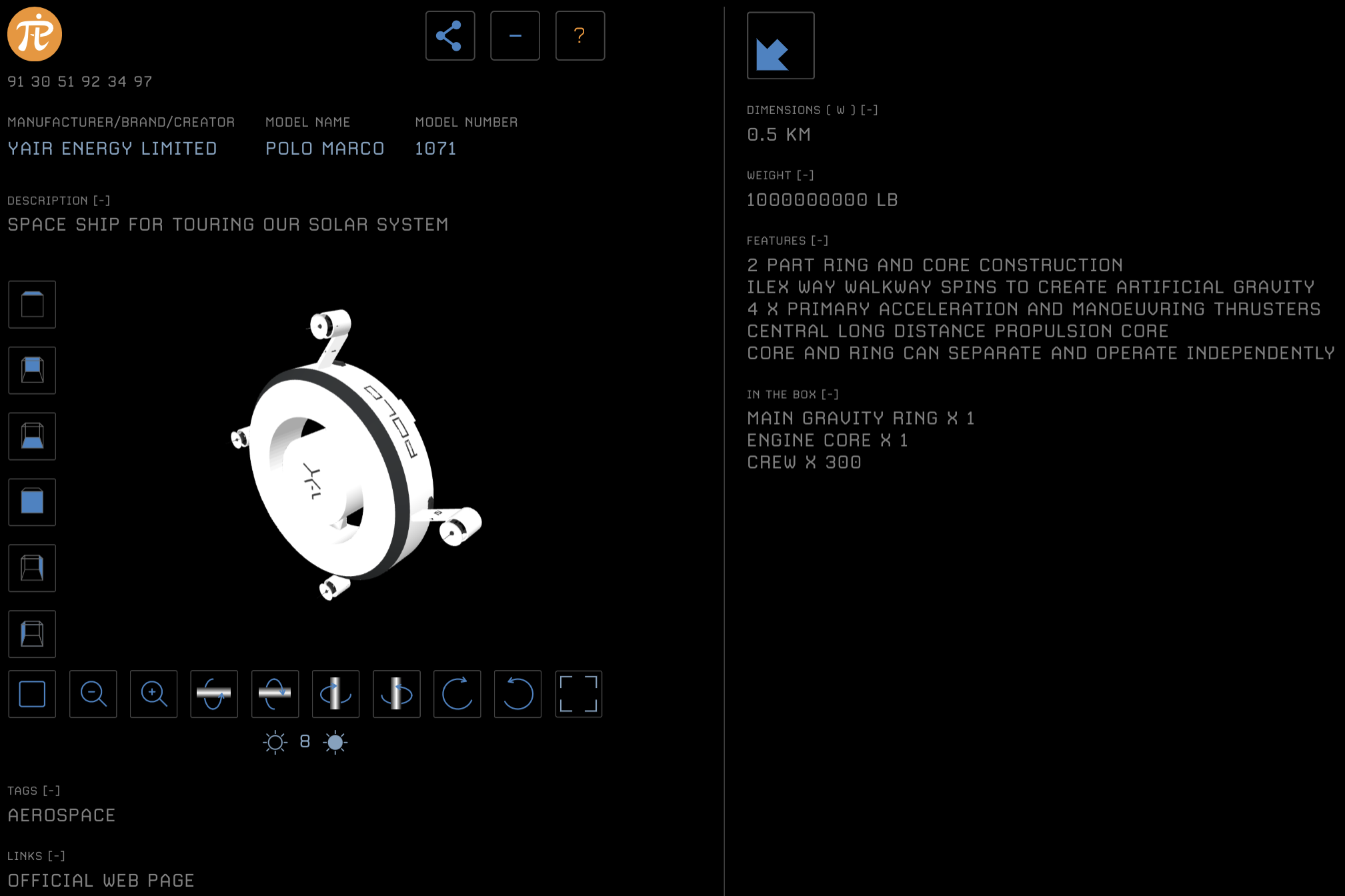 *Marco Polo was a chap, but Polo Marco is a ship, so she's a lady! 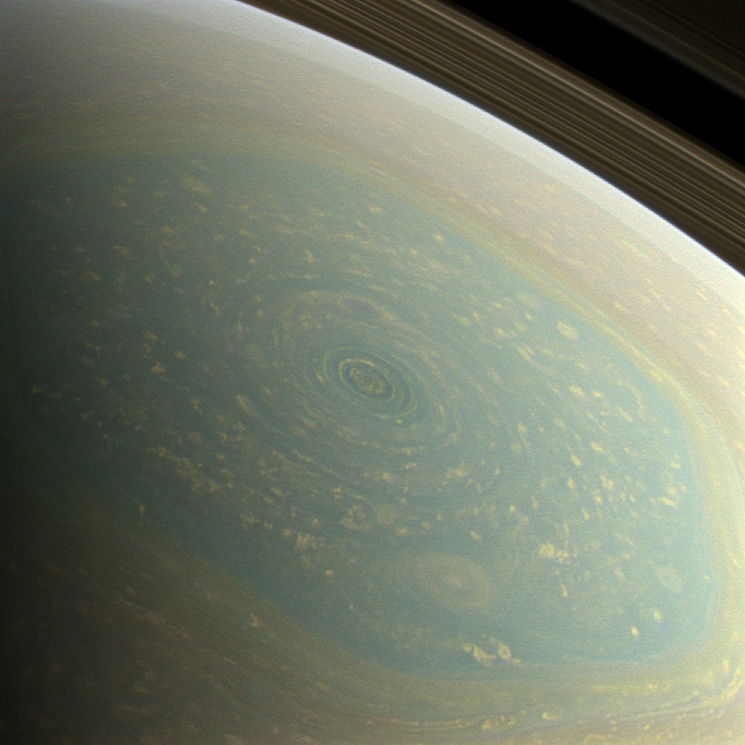 This site will be periodically updated with enhanced and new visualisations. To keep up to date follow